Street version of the Mercedes-Benz AMG CLK GT is part of an auction. Its owner has already turned down an offer of $7 million.

From 1998 to 1999, Mercedes made only 25 examples (20 coupes and five roadsters) of the CLK GTR as a road version. The No. 9 could be one of the best preserved: its paintwork is still completely original and has driven only 1,442 kilometers since its inception in 1998. Auction house Gooding & Company attempted to auction off the CLK GTR as part of Pebble Beach Auctions. The estimated price of the car with chassis number WDB2973971Y000020 ranged from 8.5 to 10 million dollars (7.14 to 8.4 million euros). However, since the highest bid was only seven million dollars, its current owner preferred to keep the athlete.

The interior is lined with leather, Alcantara and velor.

Under the hood of the CLK GTR, the naturally aspirated 6.9-liter V12 engine (M series 297) produces 612 hp and a maximum torque of 731 Nm. Power is sent to the rear wheels via a six-speed sequential gearbox. Mercedes had a lightweight carbon fiber monocoque made by English racing car specialist Lola – the super sports car weighs a total of 1140 kilograms. The road version of the CLK GTR accelerates to 100 km / h in 3.7 seconds and has a top speed of 320 km / h. Carbon brakes are responsible for the deceleration all around. By the way, Mercedes tested the engine in a McLaren F1 that was secretly purchased at that time. 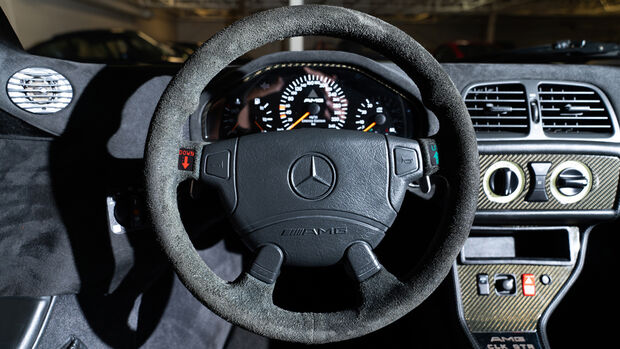 The steering wheel is very similar to that of the production Mercedes of the 1990s.

At the time, it was the most expensive production car in the world

Racing company HWA AG (HWA: Hans Werner Aufrecht, co-founder of AMG) has built a CLK GTR street version in Affalterbach. Unlike the racing version, the street version has a slightly more comfortable chassis. The interior goes well with standard Mercedes models of the late ’90s with its minimalist steering wheel, inoffensive instrumentation and an Alcantara leather interior. The copy cost 3,074,000 DM – taking inflation into account, this would be around 2.2 million euros today. At that time, the car was the most expensive sports car produced in the world.

The first owner of the CLK GTR, now for sale, was Gummersbach steel businessman Hermann Dieter Eichmann. Eschmann had the car serviced regularly by Mercedes racing experts at SPS Automotive Performance and sold it to a Hong Kong collector in 2005. In 2017, the Seattle-based import company The Cheval Trust brought the racer to the United States to display at shows. The current seller has owned a CLK GTR since 2018 – and has only driven the car for three kilometers since then. 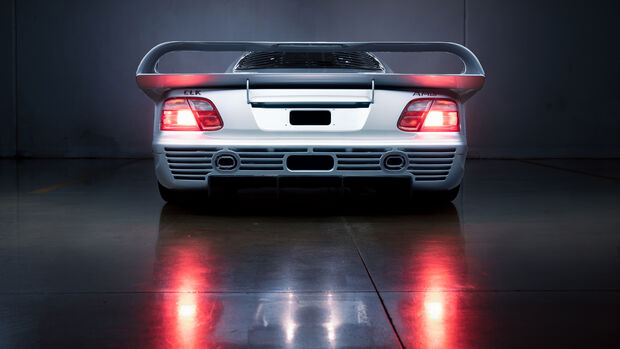 The large rear spoiler of the CLK GTR is particularly striking.

Not only does the CLK GTR come with the original manuals and an original carbon front panel that someone replaced with a new one at some point, but also a tool case with a numbered charger, torque wrench, jack, and lumber blocks to stop the car starting if you lift the onboard hydraulic lift system.

Of course – a more modern cult Mercedes is hardly possible.

No – the performance of supercars in particular quickly becomes obsolete.

Mercedes-Benz AMG CLK GTR The street version is certainly one of the most interesting and desirable sports cars of the late 20th century. The street-legal CLK GTR only existed because motorsports regulations at the time stated that at least 25 production vehicles must be produced for the FIA ​​GT World Championship.

And Mercedes did well with the CLK GTR: it dominated the 1997/98 racing season. Despite the racing accessories, it is clear that the road model can be distinguished as the Mercedes CLK. Inside is a beautifully furnished 90’s time capsule. With a quick 0-100 km/h time of 3.7 seconds, the road version of the CLK GTR was an exclusive super sports car at the time – after all, Mercedes produced only 20 coupes and five roadsters. At that time, the most expensive production car in the world had a price of about 3 million German marks, the price at auction should rise to 8.5 to 10 million dollars (currently the equivalent of about 7.18 to 8.45 million euros). Wrong thought. An interested party offered only seven million dollars. The current owner thinks “too little” and prefers to keep his sweetheart.