This Porsche 907 has competed at Le Mans three times, after which it has been with the collector for 40 years. Now it has been auctioned through the Rétromobile. However, the race car did not achieve the hoped-for auction price.

Artcurial estimated the value of the Porsche 907 at between four and six million euros, which was auctioned on Saturday, March 18, during the Rétromobile in Paris. The #031 chassis sports car has a long list of racing looks and has been owned by collectors for nearly 40 years. The mid-engined racer built in 1968 was advertised as a motorsport and sport utility vehicle. The price at which Porsche was sold at that time is unknown. The estimated value of four to six million euros was not quite reached at the Artcurial auction: the highest bid was 3.8 million euros, which, including the premium, makes the sale price to the auction house 4.29 million.

Porsche developed and built the 907 for endurance racing. The basis is a tubular space frame structure in which the engine is installed longitudinally in front of the rear axle. The driver sits to the right because it gives him a better overview of the racetracks – most of the courses are clockwise. The fiberglass body came in long and short versions. Porsche developed the 907 from the 906 and 910 six-cylinder racing cars.

The 907 consists of more than just a tubular space frame, an air-cooled boxer engine including clutch and transmission, and a chassis. With its fiberglass body, it weighs no more than the battery of a modern electric car.

First, it was a racing car with an air-cooled six-cylinder boxer engine typical of the brand and a long tail at the start. When the 771 eight-cylinder Boxer engine was completed, it was installed. The car with chassis number 031 has an air-cooled eight-cylinder engine and a hatchback body. The 2.2-liter Boxer engine generates about 270 horsepower. It doesn’t sound like much, but at 600 kilograms it is enough to keep eight-cylinder sports cars with greater displacement, such as the Ford GT40, under control. But later on, the 917 built for the five-liter class was truly superior, as Porsche celebrated a double victory at Le Mans in 1970. 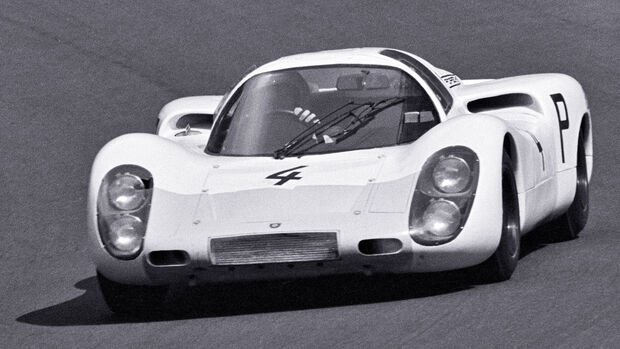 After being used in Nordschleife, the 907 was returned to the factory, repaired and finally sold in early 1969. According to Artcurial, the next owner was Alejandro Soler-Roig. The Spanish rider drove the car in the Daytona 24hours, 12 Hours of Sebring and up the hill. He won this at La Bastida and another race at Jarama by car.

After Soler-Roig had already switched to the 908 and ordered the 917, he no longer needed the 907 and sold it to the Swiss Wicky Racing team. From 1971 to 1972, racing driver Andre Wieki appeared 12 times in the 907-031 drivers list: among others, he drove the 1000 km races at Monza, at the Nürburgring and in the French month, once in the 24 Hours of Le Mans and finally up to the race mountainous. Wicky used the car two more times with other drivers at Le Mans. While Wicky didn’t finish in 1970, the 1971 race for the Mattli/Brun duo finished in seventh overall and a class win.

Starting in 1973, races became less frequent and the life of the 907-031 was quieter. In the mid-1970s, Wicky sold the car to Swiss watch collector Albert Eggs. He restored the car and finally announced it in 1983 in the 17th Edition Auto and Sport. The next owner, Ernst Schuster, kept the 907 for nearly 40 years. 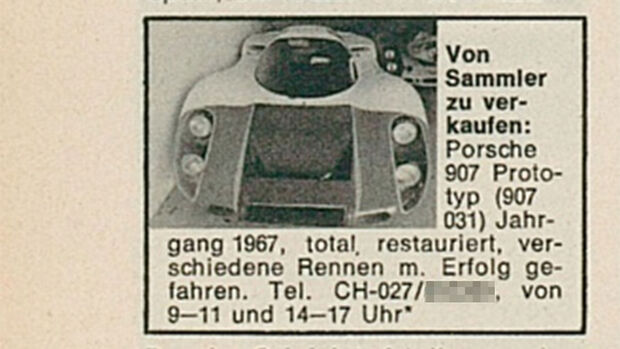 From 1991 to 1995, Schuster restored the 907 and then used it for historical events. The starting number 907 from the 2006 Goodwood Festival of Speed ​​is still stuck in the left front fender.

French auction house Artcurial auctioned the Porsche 907-031 on March 18, 2022 during the Rétromobile International Classic Car Show in Paris. The race car from 1968 has seen quite a few races, has been restored twice and has been with the previous owner for nearly 40 years. The estimated value of four to six million euros was not quite reached: the highest bid was 3.8 million euros, including the auction house’s premium, making the selling price more than four (4.29) million. Either way, an impressive price for a great car with Le Mans history.